SAN JOSE, Calif. — A battery problem with Apple iPhones has spawned eight lawsuits seeking class-action status against the handset maker, according to a Reuters report. The founder of a popular benchmark program shared his experience being among the first to identify the issue.

The lawsuits generally claim Apple failed to inform users about known performance issues that could be solved with a battery replacement, rather than buying a next-generation handset. For the past year, upgrades of iOS have intentionally slowed processors to avoid unintended shutdowns when chips demanded power spikes an aging battery could no longer deliver.

The problem came to light earlier this year for John Poole, founder of Primate Labs, the developer of Geekbench. He saw a spike in complaints about slowing performance from iPhone users coupled with 40 percent declines in Geekbench numbers.

“Whenever a new version of the iPhone comes out, we get complaints about older iPhones that feel slow. Apple does more with new OSes, and older phone can’t necessarily keep up…it’s not nefarious, and we are used to a certain level of these complaints…[but] this year we saw more of those complaints coupled with decreases in Geekbench,” Poole said in an interview.

When a user posted on Reddit that his iPhone’s performance returned to normal after he replaced its battery, “I started digging into the results and that’s when I realized there was something going on,” Poole said.

He tapped into his database of 6 million Geekbench scores, plotting performance of different versions of the iPhone using different versions of iOS. Handsets using iOS version 10.2.1 and later revealed an anomaly. Rather than a single distribution around an average peak performance, they also showed the highest peak followed by multiple lower peaks. 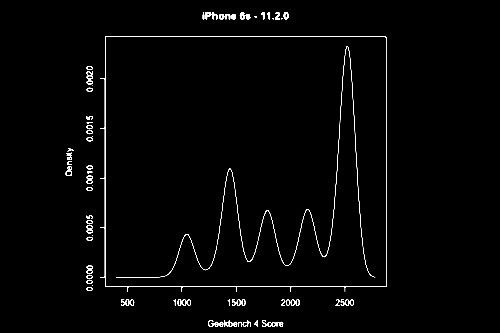 “The conclusion we drew was 10.2.1 introduced some change that effected performance in a systematic way in a significant number of phones,” Poole said.

After he published his results, Apple publicly responded to growing questions with a statement posted by National Public Radio and other a Web sites:

“Lithium-ion batteries become less capable of supplying peak current demands when in cold conditions, have a low battery charge or as they age over time, which can result in the device unexpectedly shutting down to protect its electronic components.

"Last year we released a feature for iPhone 6, iPhone 6s and iPhone SE to smooth out the instantaneous peaks only when needed to prevent the device from unexpectedly shutting down during these conditions. We've now extended that feature to iPhone 7 with iOS 11.2, and plan to add support for other products in the future," Apple said